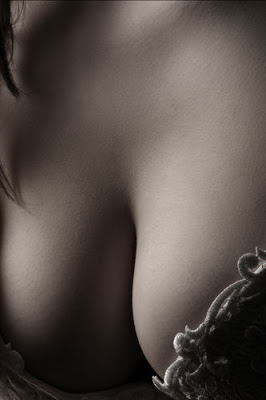 some girls go for the deep, salacious v: designed for the eye to get lost deep within its sultry notions. some girls hitch them high: system of pulleys rendering a shape at odds with nature. some shy away from presentation or prominence at all: under wraps for all but the luckiest (aerodynamic too). we personally like the flutter: just enough free-will that the girls move with us, each step a small flirtation of femininity. hey, to each her own.

whatever your preferred way to cleave, we hope you’re wearing the bubbies well this week, showing them off as they were meant. oh, haven’t you heard? we’re trying to start an earthquake. technically yesterday (we of course participated, without realizing) boobquake is the brainchild of the blag hag, a global call for women to show some skin in a show of solidarity against stupidity. specifically, the stupidity of this iranian cleric, recently quoted as saying that the revealing clothing of women are to blame for recent earthquakes. in actuality, this dude’s logic argues it’s adulterous men who directly affect the rate of earthquakes, but brasandranties won’t bother with logic here. the more pressing matter is his perpetuation of ignorance. perhaps there actually is a force of anger at the root of our planet’s prodigious irritations, this recent rash of nature’s revenge. but perhaps it’s a reaction to the fundamental destruction humans have wreaked. perhaps it’s a reminder that money doesn’t make the world go-round, but rather, makes it stop. perhaps it’s in response to his own religion’s removal of rights. the world is chock-full of people clamoring to be heard, to impart point of view on the unassuming. this man is very proof that the world is also full of idiots, including idiots in places of relative prominence. no human error will be overcome with the endurance of blame, with misogynistic missives. shouldn’t our sole, shared goal simply be survival? besides. if the end does come, we’re willing to bet you’ll want some boobies then.