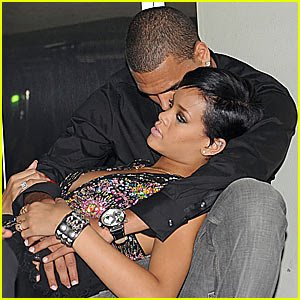 i know star magazine is a shit-rag and lainey rules all, but the mag is exclusively reporting that our riri went and married the vile chris brown.

the media and the gossip-hungry (even the gossip-snackers) are all pretty fixated on this story, closely following the status of their relationship, and mutual friend’s reactions and comments. and we are certainly eating it up. a sick curiosity, i think not. it just seems as if the topic of abuse is so rarely out in the open, that the floodgates are open and the conversation’s been unleashed.

and some of you will bust my balls about it, but poor rihanna. it no doubt sparks the debate around celebrity, and where the line is drawn between your personal life and your position in culture as a role model. but either way, she’s made a grave mistake in judgment.

the silver lining of this unquestionably sad, fortunately public situation is that the facts around abuse are being widely discussed in the media, and hopefully amongst friends & fams. the sad fact is that there’s a reason she’s potentially commited her life to him, and it’s indicative of a very disrupted perspective.

i hadn’t realized how many females around us have experienced abuse until i experienced it myself. one time. and that was enough for me. it’s a scary fact of life that should be out in the open. women need to share with other women, educated other women, aid other women. instead of sending them hate mail.

personally, i think she should just play ‘rehab’ a hundred times until she hates him.

One thought on “eesh.”