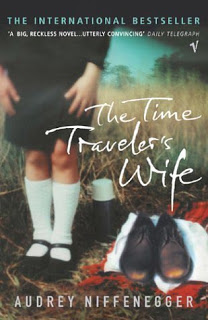 many of us have been anticipating the arrival of the time traveller’s wife. the opening has been pushed back twice, according to lainey, now set to premiere in august. not exactly blockbuster season.
she features the trailer here. and though j’adore rachel mcadams (and eric bana, for that matter) we can’t help but agree. this looks tres fromage.
so many enjoyed the book because of its beautiful storytelling. so much of the love came through to the reader via the nuances of longing, and the attempts to love within chaos. after watching the trailer, you can’t help but wonder if they’ve simply dumbed down the intensity of it all, in order to satisfy the masses. which infuriates me. why should i suffer?
speaking of beautiful storytelling, i just finished the most beautiful book, the history of love by nicole krauss. deeply moving and gorgeously told through the eyes of an extremely intruiging protagonist; i was truly enchanted. i’ve included an excerpt below, which i posted to my facebook and everyone ignored. it gave me shivers.
so many words get lost. they leave the mouth and lose their courage, wandering aimlessly until they are swept into the gutter like dead leaves. on rainy days you can hear the chorus rushing past: iwasabeautifulgirlpleasedon’tgoi’veneverlovedanyoneithinkofmyselfasfunnyforgiveme…
there was a time when it wasn’t uncommon to use a piece of string to guide words that otherwise might falter on the way to their destinations. shy people carried a little bundle of string in their pockets, but people considered loudmouths had no less need for it, since those used to being overheard by everyone were often at a loss for how to make themselves heard by someone. the physical distance between two people using a string was often small; sometimes the smaller the distance, the greater the need for the string.
the practice of attaching cups to the ends of the string came much later. some say it is related to the irrepressible urge to press shells to our ears, to hear the still-surviving echo of the world’s first expression. sometimes no length of string is long enough to say the thing that needs to be said. in such cases all the string can do, in whatever its form, is conduct a person’s silence.