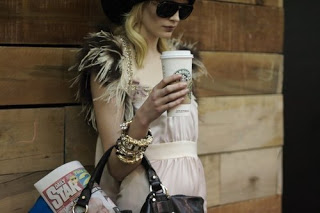 this was [honestly] overheard today:

of course i’m going. all the socials are.
please. i (unfortunately) know a girl who, when asked what she does for a living, used to provide the response that she was a socialite. in truth, nothing about this girl qualified her as a socialite, with the exception of her unrelenting quest to have her picture taken.
funnily enough, around the time that the city‘s olivia palermo started branding herself a ‘social’ (the evolved form of socialite, i gather?) this useless twit followed suit.
apparently it’s caught on.
i personally believe that, save for a select few, socialites don’t really exist in this town. nor should they. however the number of young women who seem fixated on inclusion within this classification is undeniable. and, to be honest, it’s laughable.
i would like to be part of a society where the people who influence culture are actually worthwhile. they are people who evolve opinions and art. they are people who inspire and are inspired. they are not these fools. there are too many of these fools.
would love to hear your thoughts.