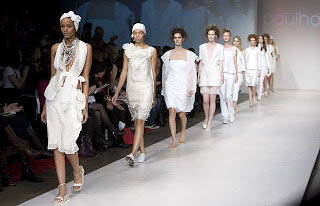 bras and ranties found paul hardy’s ss2010 collection a surprising one; not only because of his rough and tumble (yet) angelically light and white collection; but also because we’d never heard of the man.

rather than experimenting within a palette of color, the designer instead played around with variations in textures, sending fabrics such as muslin, lace, organza, silks and snakeskins down the runway, each in a strong white or raw-ivory. and while the execution of a few pieces may have been somewhat precious (one piece resembled a recent idea we’d had that involved our bed linen and a sewing machine) we think the collection captured an interesting take on femininity.

we saw: dresses pretty enough for a bride to adorn at a day/beach/funky wedding. multimedia onesies of lace and muslin. billowy, ethereal tunics over knit leggings. bustles done with raw and unfinished edges. and lace bloomers peeking out from underneath a long, luxurious bedroom jacket.

a post-show read up on the designer discovered that his angelic creations and creamy white pieces reference the designer’s social conscience and his fresh design direction. his collection was dedicated establishing an initiative in east Africa to provide women with microbusiness sewing work. the women will produce hardy’s “reversal of fortune” collection, with revenues funneled to trust funds that will spread awareness and education for the country’s orphaned children.
[image via fashion magazine]