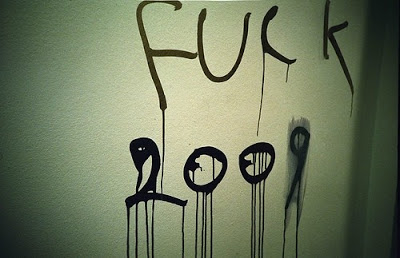 as this relatively wretched 2009 draws to a close, many of us are beginning to take pause and reflect on the year, all the bullshit it threw at us and just how we feel now that we’ve made it to the end of this run. are we at the end of the tunnel? fuck, let’s hope so.

even more significant than the close of a year is the close of a decade, the 2000s having brought about fundamental change to the world and its citizens beyond anything we could have imagined on that millennium new year’s eve. definitions of work, wealth and self have metamorphosed, the world’s landscape today something none of us would have predicted.
bras and ranties often philosophizes on the universe’s tendency to intervene and impact change when one isn’t making that change herself. we can perhaps apply a similar ideology to these growing pains of the zeitgeist; a breaking down of systems in order to build back better than before. in the case of our economy, our social structures, our environment and our global citizenship, this may take a while. but an important step in the process is determining what’s best to slough off and leave behind in the rubble of 2009.