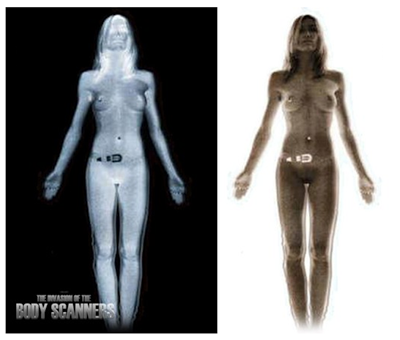 pet peeves. we hadn’t thought much of the concept before tonight, until we tried (and failed miserably) to use it gracefully within a sentence. in truth, the ugly phrase leaves behind a similar distaste as the personal (and often inexplicable) peeves themselves. oh look! ugly words. another pet peeve.

where were we? oh yes. the peeve that had us up in arms in the first place: stating the obvious. tell us why waste time, breath or energy ever stating the obvious? it infuriates us, the number of people who simply reshuffle the word jumble to try and sound like their point has a point. and yet, here we are. about to peeve all over ourselves.
you see, we find it rather necessary to address the latest corporate governance shenanigan affecting us all without our consent: these bloody body scanners.
in the midst of a war, rampant poverty, financial doom and social system destruction the canadian gov has managed yet another misuse of critical funding. $11million going toward the purchase of 44 body scanners.
let it be known that these scanners exist solely to kiss obama ass. big dog blew a bil on these suckers, and in order to not disrupt flow of people or dollars canada does what it’s told.
and yet the canadian public has no idea what exactly is happening to our bodies when we pass through these machines (besides doses of radiation, of course) and nor will we ever know. our conspiracy theorist is in the house, and let it be known: she’s terrified. what we do know is that they can see us – a lot of us. and when those images are inverted – they can see us in our glory. a flip of a switch and voila – bras and ranties full monty.
but the most absurd part of it all is the proposed process by which they plan to employ the machines. only passengers selected for secondary screening will be scanned. in other words, these highly sophisticated quarter-million-dollar xray goggle machines are completely subject to human judgement and error. for the record, these same humans allowed a flagged terrorist suspect to fly to the us with a one-way ticket and no baggage. except, of course, the bomb in his panties. we’re doomed.