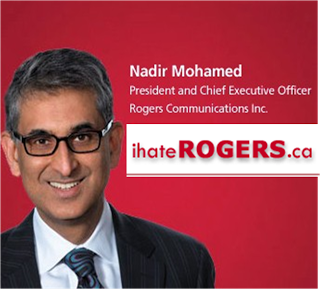 i don’t think i could possibly hate rogers more than i do at current.
two months ago, my blackberry broke. they sent me another via ups, however when it arrived t’was nothing more than an empty box. turns out some acned young thing in the warehouse had helped himself. annoying and unideal.
two months later the investigation is still open, with rogers now billing me $600 for the invisible blackberry. nevermind that i never saw the thing; and nevermind that no one at ups has bothered getting in touch with me – this is rogers’ policy and there’s nothing their beauraucratic pea brains can do about it.
when my phone rang last week and it was rogers calling me, i only assumed they’d finally dealt with the mess of their own incompetency. but no. rather, they were calling to inform me that after years of recieving 15% off my total bill (the benefit of having cable, internet and wireless services all with this awful organization) i would now only recieve 10% off each month since i have opted not to live in the dark ages and thus have no desire for a home phone.
even better, if i cancel one (or all) of these services within the next two years I OWE ROGERS every single dollar of savings they’ve provided me over this time. you have got to be fucking kidding me.
the only thing more ridiculous that this atrocious customer service policy is the fact that my only other option (bell) is even more of a disaster.
is there not competition law in canada? competition is supposed to drive efficiency and consumer incentive, and yet our telecommunication choices are nothing but balls. why is my bank account being pillaged monthly by a disastrous organization that doesn’t give consumers what they want, that doesn’t even try to retain satisfaction in the face of economic crisis and that has bullshit hardware five years behind what’s going on overseas? if i can get across the ocean in five hours why the fuck can’t i get the phone i want?
now that my shaking (and admittedly overreactive tears) have subsided, i am nothing but furiously pissed.
rogers is ignorant about consumer demands. they are apathetic towards our frustrations. they make no effort to increase efficiency. they back-pocket their profits instead of passing savings on to the consumers.
i hope and pray that i soon have another option. the moment i can be released from the clutches of rogers i am getting the fuck out. vote with your dollars people. this cannot continue. http://www.ihaterogers.ca/