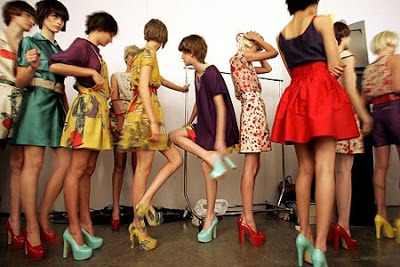 we arrived uncharacteristically on time to the taping of (an upcoming) hills aftershow, a march monday mid-afternoon. we’d been in mtv’s audience before, loving opportunity to live-rantie through one of our guiltiest pleasures. throw in obsession du jour kelly cutrone (and drinkie-poos served post-tape) and you can count us in.

while we’re still not sure what it was that we expected, we must admit we were taken aback when our entire twitter feed came to life before our eyes. aspirin-sized avatars now living, breathing, speaking words in our direction. introductions as twitter handle, real names rarely ventured, offered up. the confused stare of a stranger when we went with our own name instead of our personality’s. hugs. you know how we feel about hugs.

after a confused few minutes we were finally informed of the point of the whole thing: a soon to be launched online magazine by mtv called fora. content stacked tall with the words of local tweeters and bloggers. it all made sense now. the bloggers involved buzzed round in a frenzy, immediately identifiable by their enthusiasm (if not their peach beserk prom dresses, to-theme but extreme for an afternoon, even by bras and ranties’ standards). of course they were excited, their shit’s going mainstream. and brava.

the breed of readers who comb our posts looking for snags to grab hold to (usually ignorantly missing the point altogether) will respond to this rantie as our feeling envy for our lack of inclusion. not quite. in fact it’s been a difficult, resistance-filled process for us to bring our writing to the real world. beyond blog. unmasked from bras and ranties’ anonymity. the word: published, now carrying a whole new weight in the context of print. but this isn’t about us. this isn’t about mtv. it isn’t about the bloggers either.

this is about the frenzy altogether. the round-up of local loggers (hitching on to hard work) is a strategy we see a number of brands, marketers, publicists scrambling toward. blog-wagoning, if you will. social media is a scary place, why not turn to those already doing it? fair enough.

and yet something about the fanfare (happening the world-over) feels eerily over-inflated. a bubble approaching dangerous mass. a growth unsustainable. a matter of time. while we realize we’re doing it a bit differently (timid with our treads beyond the website’s walls, shy at recognition, averse to blowin up) we can only do what we feel good about. speak not for others and do our own thang. maybe we’ll be wrong, our trepidation perhaps unnecessary, our caution comical. but don’t say we didn’t warn you.

the woman who follows the crowd will usually go no further than the crowd. the woman who walks alone is likely to find herself in places no one has ever been before (einstein)