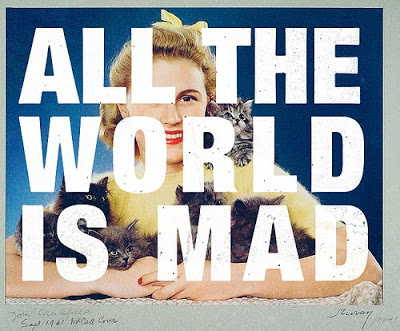 our dear city is currently in the midst of an inexplicable terror, the past sixteen days having seen fifteen pedestrians hit by cars.

all but one of them are dead.
toronto police chose to respond to sweeping public concern with a laughable public relations tactic: ticketing jaywalkers in targeted (read obvious) downtown spots. no doubt the quickest, cheapest solution to the problem. bras and ranties would call that a band-aid.
in fact at one point we witnessed (because the fucker was right in front of us) a po-po slam dem brakes in the middle of the street in order to harass (lights on, sirens on) a young lad crossing ten feet north of the crosswalk. and ticket the poor sucker they did, despite bras and ranties having noted not one, two but three drivers with cell phones up.* indeed.
and yet the issue is not about those on feet versus those on wheels. nor is it about the impotence of the toronto police force in ending the ignorant carnage. there’s a much more grave problem at hand.
the truth. too many of us are going about our business passively. we’ve managed to actually numb one of the most fundamental components of human nature: awareness. we aren’t living with our eyes open, our minds processing, our senses stimulated. we’re missing things. somehow we’ve dislodged our mind from our bodies; attention hypnotized by iphone’s glow, our daily motions left in the care of rote memory. it’s just a stream of people going through the motions. it’s fucking zombies.
wake up. turn on. look around. live now. stop thinking about what you’re not doing,who you’re not with, what you’re missing. live in the moment. watch, listen, think. this moment is all there is.
* the mighty opes doth declare that driving while texting is the impairment equivalent to driving after four glasses of wine. bras and ranties vows to put down our phone. will you?