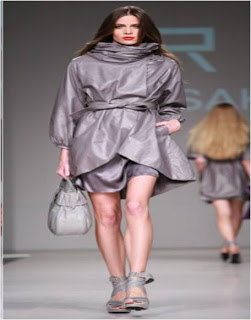 so fashion week was mad fun for bras and ranties. runway roadkill tweets aside, we also had the pleasure of doing our first designer interview on camera. and while we were absurdly unprepared to interview designer evik asatoorina of rudsak, we had the time of our lives asking after his creative inspirations and what it is that makes him weird.

since we have been obsessed with throwing leather over everything lately, the collection – and it’s on-point palette for spring – was tons of fun to see. the leather was muted in what can only be described as creamy coffees, mushrooms, grey-lilacs (such is this little number) and a chili. all of done wrapped in a very montreal street spirit, delicious buttery leather, and some fantastic shapes.
by the way we’re still dreaming of a tight little black number with unzipperable sleeves. two pieces in one. yes.
for the most part, the men’s stuff was cut hotter than the women’s, in our humble opinion, just a few of the lady shapes not updated quite enough for us to personally rock out in. we’d like to have seen some of the cuts lengthened just enough so that the world wasn’t quite sure if we had anything on underneath – ooh lah.
we just had a mini-daydream of our life in this coat. we actually think we’d rule the world in this coat. we just may have to.
see fashion magazine for the full collection.
[image via fashion magazine]