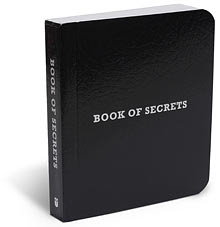 did you know there’s a secret flight from the united states to cuba every day? or that in 1966, the us government smashed a bacteria-laden light bulb inside the ny metro? or, that there’s an entire (now-abandoned) underground movie theater in france? of course you didn’t. because they’re secrets yo.
love this for the guest washroom. it will replace my current feature: excuses and lies; lines for all occasions.