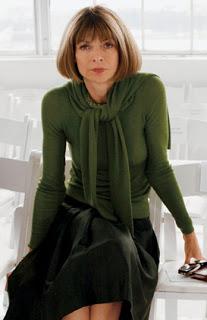 quite literally left prostrate in our sick bed last week, bras and ranties finally had the time to screen the september issue. the flick was streamed from a somewhat sketchy asian version of youtube and chugged like a mofo, but we’d venture to bet you didn’t get to see it naked under the duvet, did ya now?

frankly the annoying pauses simply provided opportunity for us to rewind and rewatch our favorite parts. perhaps it is a direct result of the sweet, sweet dutchie in which we were partaking, but we really enjoyed what we saw (despite the blahs and borings we’ve heard atwitter).

oh fine, we saw the green tomatoes. the movie by no means exposes the viewers to the full wintour, her fauxcumentary strategy quite obviously to maintain the mystique whilst curbing the ice queen. we thought we’d see much, much more couture and clothing encroyable. having to watch the making of an issue that’s now 15months old certainly lent the flick (and wintour’s outfits) a somewhat dated vibe. and where the fuck was ‘the closet’?

but it is actually the presence of vogue style editor grace coddington – and the subtext between the two british visionaries – that makes the picture. makes it. the interdynamics, the looks, the awkwardness and the distinct, thick sadness makes for serious viewing, if you’re into that kinda thing.

as for bras and ranties, we’ve always been one to enjoy witness and involvement around power struggles – most especially of the female variety. it’s a true statement that no man would be so skewered for doing exactly as anna wintour. but it’s an even more true statement that women fight for power in a very different manner than our male counterparts. it’s much more complex. much more cunning. much more designed. more pretty – less gritty. so much more interesting to watch.

the link, if you so desire.

2 thoughts on “the september issue”