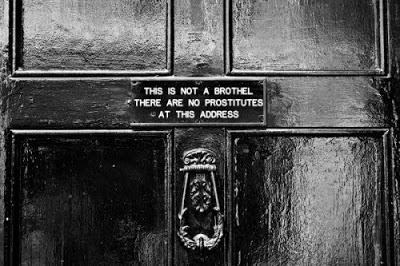 as bras and ranties blogettes away at this very moment, a mystery blonde is being taken to the hospital on life support from tiger woods’ home. what the fuck is going on chez woods man? we’ve actually lost count of tiger’s skank-tally after a weekend spend offline, but we believe the mistress count is now hovering at around ten. could elin have beat-down the eleventh?

many of you have emailed to ask our opinion on the matter, a rare occasion that a so-celebrated cultural icon would have such a public fall from grace. truth is, we’re quite sure le tigre will bounce back with a win or two, and perhaps some sex addiction therapy (his inevitable public defense). in fact, some might even argue that the scandal du jour works to overcome tiger’s biggest issue as a marketable endorsement: that until now, he wasn’t much more than a robotic (almost inhuman) winning machine.
in our opinion, tiger’s particular exposition is a rather obvious case of xdork syndrome, all the winning in the world not enough to make this man forget his insecurities and tauntings as a boy. and while pro atheletes and their groupies go hand in hand (or at least something in-hand) the revelation that over ten women have had long-term relationships with him within his three years of marriage is unforgivable.
in truth, bras and ranties has been on both sides of the cheating coin, the gaping pain of having been the cheatee rather easily forgotten in the eye of temptation. but we believe young loves are made for mistakes and lessons, the hurt inflicted by our actions something we’ll never allow to happen again. but to make these mistakes repeatedly, both sexually and emotionally (and with porn stars) after vowing marriage? it’s a mockery.
we’d like to see less couples committing to marriage just for the sake of it. if you can’t envision yourself with one partner for life, why promise it? why even pretend? put thought and insight to how you want the rest of your love life to unfold. be bold enough to step away from traditions and societal norms. design the life and the flexibility you need to be happy. don’t just take the plunge.

2 thoughts on “tiger tales (and a rantie)”