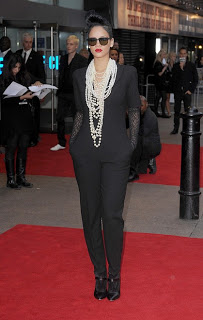 in case you haven’t picked up on it yet, bras and ranties is (pretty much) always right.
rihanna and chris brown were caught this weekend sneakily checking into the same hotel (trump in nyc), despite it violating terms of the restraining order riri has against the wife-beater.
as bras and ranties has been insisting all along, these two are still together. we don’t actually believe they ever stopped. they’ve kept it under wraps (as lady lainey always tells us – celebs decide what they want us to see) and dated a few decoys along the way but have been solid ever since their weekend reconnect at pdiddy’s, only two weeks after the beat-down.
in fact bras and ranties was so sure about this theory that we tweeted about it. and the queen of gossip herself (bonnie fuller, editor us magazine) replied to say she agreed. told you people – twitter.
the sad truth is that there are many men out there who feel safe beating a woman. safe, because he’s broken her down enough to completely be in power. he knows she’ll never leave, and he knows she’ll never tell. meanwhile, she probably makes excuses for his demons and justifies his suffering. or she believes him when he promises it will never happen again.
it has taken years to overcome the fact that someone i once loved had enough hatred within him to do this to me one night. it happened once and only once, and yet. the damage is irreparable. not for the scars and not for the memories, but the painful awareness that i’d found myself in a situation that could be so devastatingly bad. that i’d ignored warning signs and toxicity for the sake of…someone else. the worst/best day, i should rather, as it began the journey for insight and understanding around myself, my life, my character, my world. but nothing can make me forgot that i’d put myself second to another for long enough to wake up one day and belong on fucking jerry springer.
they can’t even gather numbers on the number of women who suffer spousal abuse, because it’s so rarely discussed. start the conversation, share your stories and empower scared women to leave situations that are dangerous for their selves and their souls. enough.
ps: two thumbs down for riri’s outfit. we call this a nay – quite literally.

2 thoughts on “to continue today’s gloat-fest”