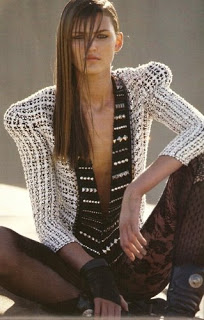 it’s time for part one of our four (probs?) part series on the upcoming f/w trends, as per fashion magazine.
we’ve spread out the info, since it’s best to focus on one particular inspiraton at a time. this puts you in the headspace to start thinking about what you like, what might rock, what you can re-work. even if cutting edge is not necessarily your thang, i challenge you to consider each as an option for your style, in whatever iteration you feel good in. it will make you feel fresh, edgy and sassy. so um…why wouldn’t you?
in truth, though the influences are quite a mixed bag (the fashion industry’s typical menage-a-trend) there’s commonality throughout. key influences of the daring extremes of the 80s, coupled with the feminine (yet sharp) elegance of the 40s provides a palette for the resurgence of the fierce woman. influenced in history yet grown and toughened up, f/w is strong, serious and beautiful. nothing done in whimsical romanticism, it can best be described with one word: impact.
part one: the 80s…obvie.
as it was, so it shall be – the 80s influence this season shares the anything-goes attitude of years past. but this time it’s strictly unjuvenile, with a focus on the extreme. daring. brash. essentially, sex on wheels and really high heels.
it’s about the biker. admittedly a non-shocker, the biker-babe body-con-mini thang has been going on for a while now. the tail end of last f/w saw the emergence of textured leggings (i myself rocked a black faux-snakeskin pair that chef cory dubbed “the foreskin pants”) and this continues into next season. lean and mean leather leggings (or consider a suede) will be everywhere, as will motocross style jeans and (a bras and ranties favie) jeggings.
boots play a huge role in this trend because (as we’ve been saying for forevs now) there’s no other way but over the knee. the boots go so high they’re essentially acting as leggings, done with a sheer tight underneath. get yours now. regardless, look for hardware and embellishment on shoes. your dream pair would mix silver and gold.
leather everything. that is all.
most importantly, sharp shoulders reign through both key trends, so if you haven’t come to terms with it yet, you should. for the record – i have two cropped leather jackets with major shoulder action, primed for the first fall chill. drool. this look, though rooted in the androgynous boyfriend jackets from season past, regains its femininity with the sharp constrasting with the nipped. robot hot with a hint of dynasty.
later in the week we will be overviewing the makeup and hair trends that complement this f/w vibe. stay tuned for that, and other write-ups each day this week. mwah.